Main Street Living is a Lutheran Television program that is endorsed by the Lutheran Church-Missouri Synod.

The broadcast has two parts. Remastered episodes of the Emmy award-winning Lutheran Hour Ministries “This is the Life” program were originally aired from the 1950’s to the 1980’s. This program has been re-mastered to the modern format.

The Worship Service is produced locally and features a different presenter each week selected from the Pastors in each broadcast area. To view the program produced for your area, select the city above which is closest to you.

Check your local listing for the time and channel it airs in your area. The channel also varies with cable systems.

The program is financially supported by the viewers and congregations in each viewing area. 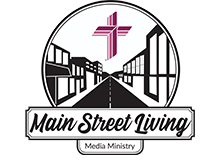 Rev. Ryan Drevlow, the pastor at Our Redeemer Lutheran Church in Sioux Falls, SD, presents a message titled ”The Abundance of Presence”. This sermon is based on Exodus 33:13. This program is interpreted and closed-captioned for the hearing impaired.

This is the Life – “Burden Made Light”
Click Here to Watch!

This is the Life – “Burden Made Light” – The housekeeper helps a family through the struggle of an increasingly sick child.